Results from Crime Stoppers’ recent Dob in a Dealer campaign are expected to disrupt the nation’s illegal drugs market for some time. 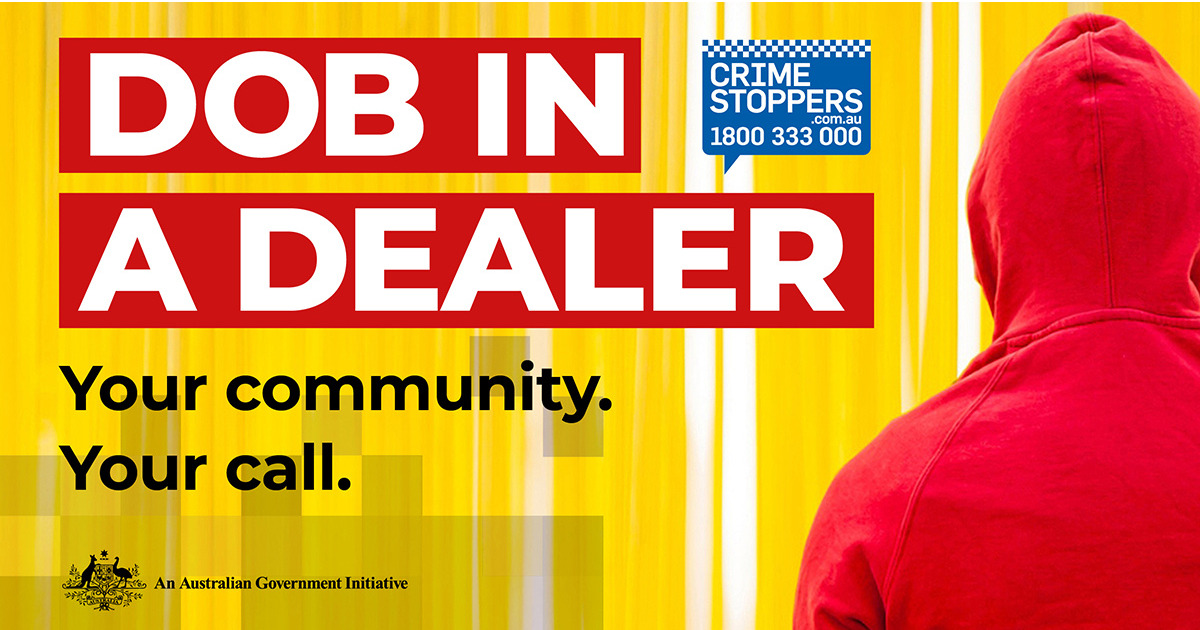 Results from Crime Stoppers’ recent Dob in a Dealer campaign are expected to disrupt the nation’s illegal drugs market for some time thanks to more than 47,000 Information Reports received from concerned people in the community.

The Dob in a Dealer campaign, which ran from September 2018 until April 2019, encouraged people to anonymously provide information about anyone making, growing or selling drugs; with plenty taking advantage of the opportunity to share what they know.

Crime Stoppers Australia Board member and Chair of Crime Stoppers Northern Territory, Ms Catherine Phillips said: “It’s fair to say that if you operate in the illegal drugs trade then you should start looking over your shoulder, because we experienced a staggering 65% increase in the number of drug-specific Information Reports received during the Dob in a Dealer campaign. The valuable information provided to Crime Stoppers is expected to provide police with strong lines of enquiry in relation to drug manufacturing labs, illegal importation activities and drug dealing syndicates active in metropolitan, regional and rural locations right across the country.”

“On the back of the recent release of the latest wastewater drug monitoring results by the Australian Criminal Intelligence Commission, it is imperative to do everything possible to ensure ongoing disruption to the illegal drug trade. The average consumption of MDMA in capital city and regional sites, and the average heroin consumption in capital city sites is now at the highest levels ever recorded,” Ms Phillips said.

“We know people are increasingly concerned about the level of drug use amongst their families, friends and work mates. That’s why we held more than 81 community-based events during the Dob in a Dealer campaign to directly engage people at a grass-roots level to explain the dangers of drugs and encourage them to share information with Crime Stoppers,” she said.

“Drug dealers are often hiding in plain sight within the community and are able to conduct their illicit trade unchallenged because people are often too scared to speak out for fear of retaliation. Crime Stoppers provides a solution where they can share what they know anonymously, and the Dob in a Dealer campaign drove home that message.”

Information from the community had already sparked police raids and investigations across Australia, resulting in quantities of illegal drugs and precursor chemicals being seized, including Fantasy, Amphetamine, GHB, and Cannabis.

“It’s also common for weapons to be seized from drug dealing criminals during raids, as well as stolen property and large quantities of cash from the proceeds of drug deals. And while every piece of information can make a real difference, it’s important to understand that information provided to police via Crime Stoppers may achieve an immediate result or can also form part of longer-term investigations,” Ms Phillips said.

“Crime Stoppers Northern Territory was pleased to play an active part in this national success, with Local Area Campaigns in Darwin, Katherine and Alice Springs generating about a total of 82 Information Reports,” she said.

In addition to extensive social and traditional media activity, the Dob in a Dealer campaign also featured a strong multi-cultural presence to directly engage a wider cross-section of the community.

Highlights from the Dob in a Dealer national campaign include:

Receiving a total of 47,277 drug-related Information Reports across all Crime Stoppers programs during the campaign.
The delivery of 81 Local Area Campaigns in metropolitan, regional and rural Australia;
Generating 2,293 drug-related Information Reports from these localised collaborations;
Achieving an aggregated average increase of 65% in Information Reports in the immediate weeks following local area campaigns;
Engaging 110 new organisations to actively support the campaign, with many being community-based, Culturally and Linguistically Diverse and Disability organisations;
Generating awareness of Dob in a Dealer in the general public – with an estimated 93,395,339 people engaged through more than 1800 media features.
Achieving a social media audience reach of 1,939,072 people, with more than 101,000 likes, comments and shares.
“Our thanks go to the community for their trust in sharing what they know, Police for acting on information received and for the Federal Government’s significant funding which helped make the Dob in a Dealer campaign possible,” Ms Phillips said.

“While the Dob in a Dealer campaign has now finished, our focus on helping to stop drug makers and dealers continues. That’s why we urge the community to come forward and report any information about criminals or criminal activity to Crime Stoppers by calling 1800 333 000.”

Call to action : Feature without Image